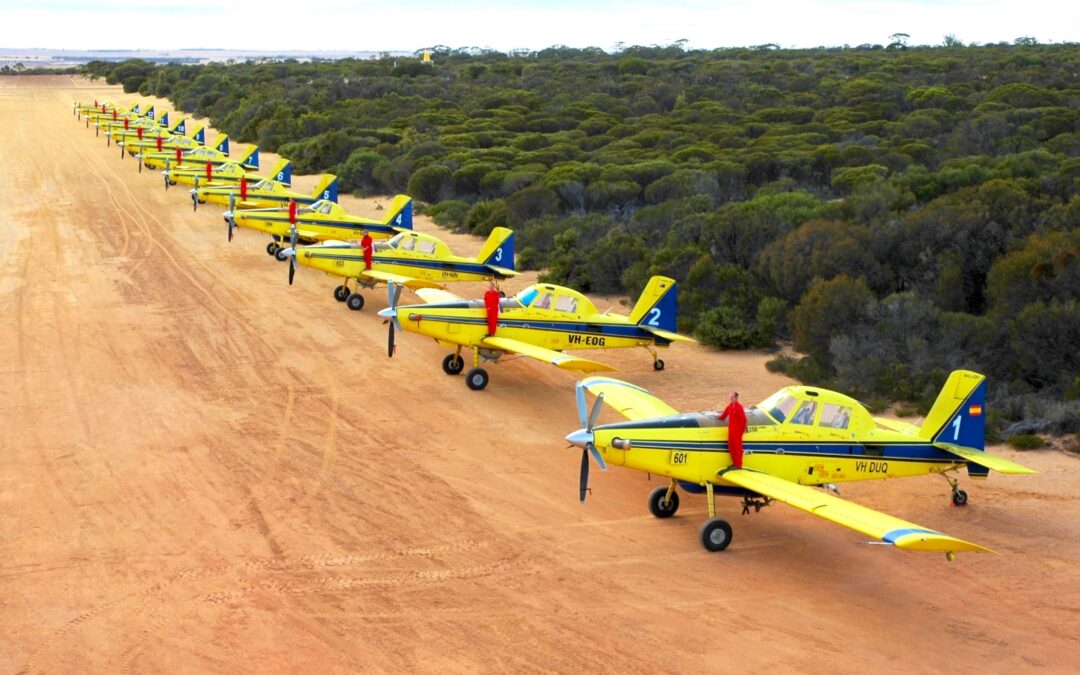 Australian Air Tractor operator Neville Dunn of Dunn Aviation recently took delivery of AT-802A-0900, the 900th in the 802 ag and firefighting series built by Air Tractor, Inc. in Olney, Texas. It will take its place among eleven other Air Tractor AT-802 series aircraft, an AT-504, AT-502B and an AT-401. Ferry pilot Stephen Death prepares to depart Air Tractor for Australia with 802A-0900.

One reason why Dunn Aviation has become the largest ag operator in Western Australia is that they offer a wide range of services, including firefighting, pest and disease control, baiting, fertilizing, seeding, oil slick pollution control, mine site dust suppression, and revegetation. They provide more services and more ways to generate income in the rugged, hardscrabble region.

Dunn’s father, Ian Dunn, founded the company in Ballidu in 1965. The elder Dunn provided spraying services for cereal crops with one 790-liter capacity IMCO CallAir A-9. Other operators in the region were using converted de Havilland Tiger Moth airplanes at the time. From that initial CallAir, the company went to four Piper Pawnees, then to six Cessna AGwagons. Farmers in 1977 started growing legumes in Western Australia amongst their cereal crops so the ultra low volume spraying in the area soon disappeared.

“My father had a colorful history,” Dunn recalls. “He had never got his pilot’s license until 1961. From 1947 when he began barnstorming to 1961, no license. And to top it off, they said, to prepare the new license, you had to send them two photos. One photo is to be on file. And one photo is on the license. Dad only had two photos of himself. So, one was him standing there. And another one was him with his arm around a Jersey cow, for which he’d won the blue ribbon. Which one did they put on his license? Well, of course, the one with his arm around the jersey cow.”

Ian Dunn’s pilot license, and photo with the Jersey cow.

Neville Dunn comes from a family of pilots. “Dad had five children with our mother: four boys and a girl. We all either fly or operate aircraft,” Dunn said. “So, an aircraft to our family was like a family car. I started flying in 1984. By 1988 I was flying ag on night cotton operations on the east side of our country. I did 16 summer night seasons and would return home to conduct the winter/spring spraying on the West Coast. During this time, I gained 15,000 hours of ag experience, predominantly in AT-502 aircraft.”

Dunn bought his first Air Tractor in 1997, an AT-502B, and has been a believer in Air Tractor planes since. “It’s just the reliability of the Air Tractor and the service network behind it,” Dunn said.

Dunn recalls helping Air Tractor founder Leland Snow with airplane improvements. “American operators were probably doing about 500 hours a year on their airplanes, on average. But we were doing a thousand. So, if something was going to break, it happened here first. Then we would be ringing up Leland saying, ‘Oh, this here is cracked, and that’s wearing out…’ And Leland would make it bit stronger. It was part of Air Tractor’s product improvements — constant product improvement.”

Today, Dunn Aviation employs 15 pilots with a mixture of year-round and seasonal services including aerial spraying, firefighting, and providing environmental services for mining companies. Some pilots move around doing fires only; some pilots travel as far as Canada or China for agricultural work. For agricultural spraying, they operate in a 300-mile long by 150-mile-wide area of Western Australia. For firefighting and environmental work, the company operates statewide.

Dunn was among the early adopters of the AT-802F “single-engine air tanker.” For Dunn, it was part of the evolution of the industry. “During the early ’90s, my father lobbied the state government to start aerial firefighting. My father and I purchased one radial Dromader each. However, it became apparent very quickly that maintenance and lack of support meant we had to buy another one just to have spare parts,” Dunn recalled. “In 1996, we commenced the first trial of aerial firefighting in our state using ‘rapid initial attack’ and targeting the head fire to slow the rate of spread. The tactics were very successful. Our government studied our operation over several years, and the cost-to-benefit ratio for the community was excellent. Eventually, we grew to 7 Dromader aircraft.”

In 2000, Dunn conducted aerial firefighting on the East Coast in very mountainous terrain with his AT-602 and worked alongside an AT-802 operated by Col Pay of Pays Air Service. Pay was a distinguished operator in Australia. “Col was the first owner of an AT 802 in Australia and at that time he also had a P-51 Mustang, Kittyhawk P-40, and Supermarine Spitfire in his hangar. So when Col spoke, us young guys listened. He said that the AT-802 was the best aircraft he had ever owned. It was very clear that the AT-802F was the aircraft to have,” Dunn recalls.

In 2001 Dunn sold his AT-602 to an operator in New Zealand and purchased a new AT-802, S/N -0105. “The AUD to USD exchange rate was 53 cents in those days. This AT-802 was by far the most expensive agricultural aircraft in Australia at the time. In 2004 I purchased my second AT-802 and demonstrated the 802s to our state government, and they could see the cost-to-performance benefit in comparison to the Dromader aircraft.” It was an important move. “Our dryland seasonal agricultural business operates only during winter/spring,” he said. “Our focus on aerial firefighting spawned from the idea of continuous year-round work, allowing us to amortize capital outlays and retain our core employees year-round,” noted Dunn.

To run a versatile operation like this, training is vital. Dunn said that all his flight training is done in-house.  “We start juniors in our Cessna AGhusky and then they move on to the AT-401, then into an AT-502 doing agricultural work,” he said.

The company’s AT-504 is pivotal in the operation. The 2014 model AT-504 has flown about 800 hours, Dunn reports.  “For fire training, we have fitted a Transland fire gate to the AT-504 and trained the pilots with this aircraft. Having side-by-side seating is excellent for both trainee and supervisor. They train at actual wildfires together for several hours in the AT-504 before going to AT-802. We have a full dual control dual instrumentation AT-802 for the next step up from the AT-504. We don’t do actual fire training in this aircraft — only simulated work as visibility is somewhat limited for the supervisor in the rear seat.”

As bushfires become more frequent in Australia, Dunn believes the use of rapid initial attack strategy is essential to Australia’s aerial firefighting system. “I would like to see more rapid initial attack on the East coast of Australia—and globally for that matter. It absolutely works, and is cost-to-benefit effective,” said Dunn.

It’s assured that both AT-802A-0900 and -0905 air tankers will see action soon enough in today’s intensifying environment. And it’s a safe bet that the experienced team at Dunn Aviation and their fleet of reliable Air Tractors will be doing their part to protect the land, resources, wildlife, and people of Australia from the ravages of wildfires.